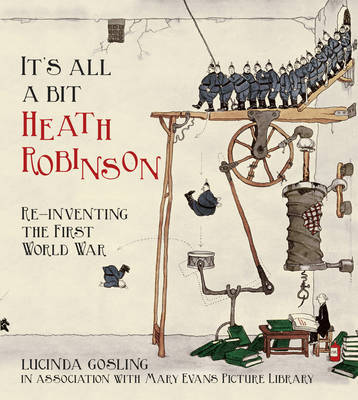 It's All a Bit Heath Robinson: Re-Inventing the First World War

William Heath Robinson remains one of Britain’s best-loved illustrators and has embedded himself into English vernacular, inspiring the phrase ‘it’s all a bit Heath Robinson’ to describe any precarious or unnecessarily complex contraption.Born in London, he originally had ambitions to be a landscape painter, but would establish his artistic reputation as a book illustrator during the genre’s so-called golden age. It was his association with weekly illustrated magazine The Sketch that was to launch and cement his legacy as a humorous artist. Combining a distinctive draughtsmanship with a curious and ingenious mind, the advent of the First World War inspired Heath Robinson to dream up a series of increasingly outlandish and bizarre military inventions with which the opposing armies would try to outwit each other. From the kaiser’s campaigning car or a suggestion for an armoured bayonet curler, to post-war ‘unbullying’ of beef, his cartoons are a fantastically absurd take on wartime technology and home-front life. Sadly, his inventions were rejected by a (fictitious) ‘Inventions Board’, but the charm and eccentricity of his ideas was loved by the public and he remains to this day one of the finest exponents of humorous British art.

Lucinda Gosling is the former manager of the magazine archive of the "Illustrated London News" and is currently historical specialist at Mary Evans Picture Library. She has contributed to "History Today," "Majesty," and "Illustration "magazine, and is the author of several previous books, including "Brushes & Bayonets "and "Debutantes and the London Season."