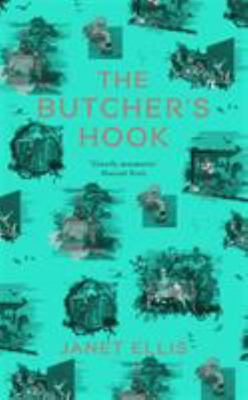 The debut novel by actress and presenter Janet Ellis. A dark and twisted tale set in 18th century London.
Georgian London, in the summer of 1763.
At nineteen, Anne Jaccob is awakened to the possibility of joy when she meets Fub, the butcher's apprentice, and begins to imagine a life of passion with him.
The only daughter of well-to-do parents, Anne lives a sheltered life. Her home is a miserable place. Though her family want for nothing, her father is uncaring, her mother is ailing, and the baby brother who taught her to love is dead. Unfortunately her parents have already chosen a more suitable husband for her than Fub.
But Anne is a determined young woman, with an idiosyncratic moral compass. In the matter of pursuing her own happiness, she shows no fear or hesitation. Even if it means getting a little blood on her hands.
A vivid and surprising tale, The Butcher's Hook brims with the colour and atmosphere of Georgian London, as seen through the eyes of a strange and memorable young woman.
-~-~-~-~-~-
'Do you know what this is?' He holds a short twist of thick metal, in the shape of the letter 'S', sharpened at both ends. I shake my head.
'A butcher's hook,' he says, testing the tip of his finger against each point. 'A perfect design. Whichever way up you use it, it's always ready. One end to hook, the other to hang. It has only one simple purpose.' He stands on a stool and fixes it over the bar above him. It waits there, empty.
He climbs down. 'Pleasing, isn't it?'

Ellis has created something marvellous in the character of Anne Jaccob - her voice is strange, dark and utterly mesmeric. This is historical fiction as I've never encountered it before: full of viscera, snarling humour and obsessive desire. I loved it. Hannah Kent, bestselling author of BURIAL RITES The Butcher's Hook is bewitching: Anne Jacob is a dark and dangerous heroine and her story is gripping and full of surprises. This is an exciting and hugely impressive debut from Janet Ellis. Antonia Hodgson, bestselling author of THE DEVIL IN THE MARSHALSEA

Janet Ellis trained as an actress at the Central School of Speech and Drama. She is best known for presenting Blue Peter and contributes to numerous radio and TV programmes. She recently graduated from the Curtis Brown creative writing school. The Butcher's Hook is her first novel. twitter.com/missjanetellis