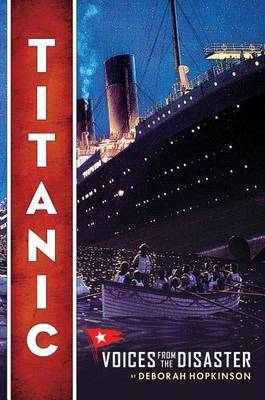 Titanic: Voices from the Disaster

EARLY MORNING ON APRIL 15, 1912, the RMS Titanic, on her glorious maiden voyage from Southampton to New York, sank after striking an iceberg in the North Atlantic. Thus the ship declared to be unsinkable was lost in one of the most infamous tragedies in history. Even now, a century later, the events surrounding the Titanic continue to haunt and intrigue us.


Critically acclaimed author Deborah Hopkinson weaves together the voices of Titanic survivors and witnesses to the disaster to bring the horrors of that terrible night to life. There's nine-year-old Frankie Goldsmith; Violet Jessop, a young stewardess; Jack Thayer, an American high school senior; Colonel Archibald Gracie, a well-to-do gentleman; William Murdoch, a brave seaman; Charlotte Collyer, a young mother on her way to start a new life; and many others. Their recollections are filled with heart-stopping action, devastating drama, and fascinating historical details.

Awards and Praise for SHUTTING OUT THE SKY:

NYPL 100 Titles for Reading and Sharing

NYPL Book for the Teen Age

"Meticulous documentation, including full chapter notes, will help the many young people--and their parents and grandparents--who will want to know more and to research their own family roots." --BOOKLIST (starred review)