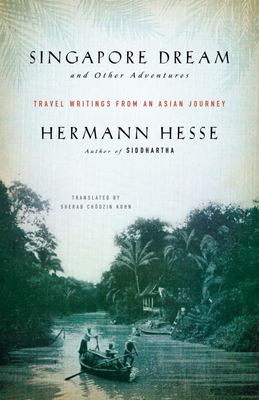 Hermann Hesse's voyage to the East Indies, recorded in journal entries and other writings translated into English for the first time, describes the experiences that influenced his greatest works.

"I knew but few of the trees and animals that I saw around me by name, I was unable to read the Chinese inscriptions, and could exchange only a few words with the children, but nowhere in foreign lands have I felt so little like a foreigner and so completely enfolded by the self-existing naturalness of life's clear river as I did here."

In 1911, Hermann Hesse sailed through southeastern Asian waters on a trip that would define much of his later writing. Hesse brings his unique eye to scenes such as adventures in a rickshaw, watching foreign theater performances, exploring strange floating cities on stilts, and luxuriating in the simple beauty of the lush natural landscape. Even in the doldrums of travel, he records his experience with faithful humor, wit, and sharp observation, offering a broad vision of travel in the early 1900s.

With a glimpse into the workings of his mind through the pages of his journals, poems, and a short story--all translated into English for the first time--these writings describe the real-life experiences that inspired Hesse to pen his most famous works.