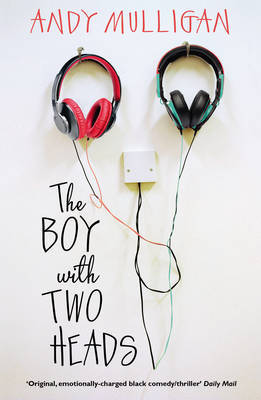 The Boy with Two Heads

How would you feel if you woke up and found another head growing out of your neck? A living, breathing, talking head, with a rude, sharp tongue and an evil sense of humour. It knows all your darkest thoughts and it's not afraid to say what it thinks ...to anybody. That's what happens to eleven-year-old Richard Westlake, and life becomes very, very complicated. Part thriller, part horror, part comedy - this is one of the most riveting novels about fear and friendship that you will ever read. Andy Mulligan won the 2011 Guardian Children's Fiction Prize, and his international bestseller, Trash, is now a major film - directed by Stephen Daldry and with screenplay by Richard Curtis.

The incredible story of a boy with two heads, from Andy Mulligan, the acclaimed author of Trash.

Andy Mulligan was brought up in South London. He worked as a theatre director for ten years, before travels in Asia prompted him to retrain as a teacher. He has taught English and Drama in Britain, India, Brazil and the Philippines. Andy's novel Trash has been published in twenty-two languages and is now a Bafta-nominated major film directed by Stephen Daldry and scripted by Richard Curtis.